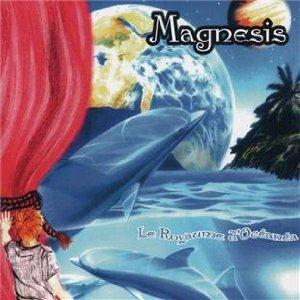 The seventh album from this French band. A band which is sticking to French vocals and is following in the great traditions of Ange, Mona Lisa and Atoll. A band who sadly only tour in France.

....Which is probably the reason why they are not mentioned in the same sentence as Pendragon and Marillion. Quality wise, they are on par with those two bands. Something this album proves.

Magnesis is a band in the theatrical French symphonic prog mould. Ange is the best known band in this genre. The vocals is in Ange mould. The music is big, bould and brave. This band is not afraid of aiming high. Sometimes, they fail. This time, they succeed.

Le Royaume D'Océanéa is by far their best album and crowning glory. It is a concept album about Phileas Fogg (?) and the ocean. It starts nicely with the Ouverture which leads to the stunning title track. A great female and male chorus leads into a keyboards and guitar solo. Brilliant solos, it is. This track alone is worthy the album itself. But the album does not finish with that song. Four more rather vocals driven pastoral, excellent songs follows before the rather strange, but also brilliant twenty-two minutes epic Abysses follows. An epic which builds up slowly and opens up as a rose at the end. A short instrumental repeat of the title theme closes this album and leaves the listener stunned. Did my ears deceive me ? Press the repeat button.

I wrote in one of the reviews of their earlier albums that this band had it in them to release a masterpiece somewhere down the road. In Le Royaume D'Océanéa, they have done that. Nice to have been proven right for a change.

In short; get this album or visit Youtube where a promotional video of the album is out. You too will be won over by this album.