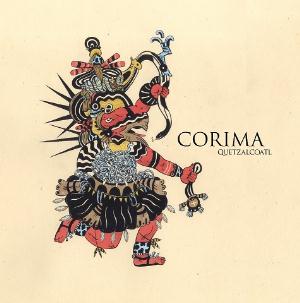 The second album from this US zeuhl band. I have not heard their first album yet and that one is on the top of my shopping list. If I can get it, it is.

Zeuhl is going through a renaissance now and Corima is one of the bands keeping this very small scene alive. Quetzalcoatl draws as much from the likes of Aranis and Univers Zero as from the likes of Magma and Koenjihyakkei though. This heady brew of RIO and zeuhl is very lively and humourous.

Quetzalcoatl is very much a party zeuhl album with it's many funny details and melody lines. The use of female vocals is great. Ditto for the woodwinds and jazzy parts. The album is a rhythm fest with a lot of weird things going on. The repetetive vocal lines is what we know from the Japanese scene and Magma. Their music is not as dark as Magma's music. That is why I label Quetzalcoatl as a party zeuhl album. An album you can play to your normal friends and have a party around. A good party, that is. Not a wake.

Quetzalcoatl is also a great album with it's many nods and winks towards the Japanese zeuhl scene. The art work is also a wink and a nod towards that scene. The result is an album which proves that the zeuhl scene anno 2012 has a lot to offer. It is an album everyone into zeuhl should purchase. I am really enjoying this album and has done that for many weeks.