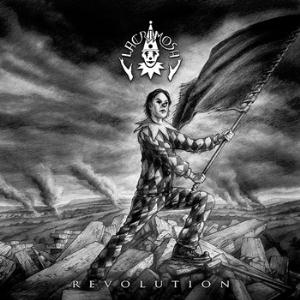 Lacrimosa is still alive and this is their eleventh studio album, I believe. I was a big fan of them around their 1995 album Inferno. That album is still their best album by miles.

Lacrimosa is the brainchild of Tilo Wolff from Germany and the first Lacrimosa album was released twenty years ago. They are rightly regarded as a cult band in the Goth Rock/Metal scene and one of the originators in this scene. They have more or less kept to their original formula throughout. The Lacrimosa formula is tonnes of sampled symphonic instruments, a plastic fantastic sound, Tino's rasping vocals and Anne Nurmi's female vocals. That and the black and white cover art paintings.

I have to admit I have grown tired of Lacrimosa's formula many years ago. Revolution is as much revolution as status quo can ever be. Fans of Lacrimosa can safely purchase this album. An album with the usual stuff. There is no great songs here and nothing that really interest me. This is a decent album, but nothing more.