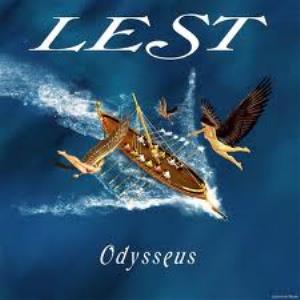 The debut album from this French power trio who is currently working hard on the follow up to this album. This according to their Facebook page.

Some excellent artwork is enveloping this album. A nice introduction to their music. Music they claims is a throwback to the good old days of progressive rock. That is where I am not entirely in agreement with them.

Lest and their music most of all sounds like a rocked up version of Gazpacho and Marillion. From that platform, they have gone back in time and picked the brains of Rush, Genesis and Yes. Their sound is very much anno 2011 though. That with some added vintage sound like mellotrons, moog and other vintage keyboards. But this album still has a very contemporary sound (most notably the guitars) and Lest has sound wise hit the right balance. The music is very much epic and sometimes very heavy too. The bass, drums, keyboards, guitars and vocals sometimes kicks like an angry horse. The good vocals are in the Gazpacho/Marillion vein.

Odysseus is somewhat lacking in the songs department though. Their material is a bit short on goodies. Their sound more than makes up for this shortcoming. This is indeed a good debut album and I am looking forward to their new album too. If the band can reproduce their sound on stage too, the festival promoters around Europe should take note.