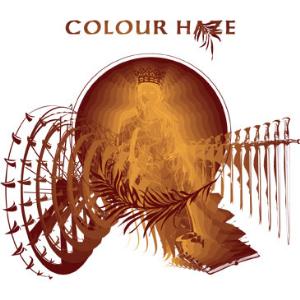 Crikey !! I have never heard about this band before. I do not have any contact with the underground psychedelic rock scene. Colour Haze released their first album around 1995 and has released numerous albums since then. She Said is a double album and contains over eighty minutes of music. Mostly long suites.

Style wise, I would label their music as krautrock. Krautrock as in Amon Duul II and Agitation Free. Their sound and music is not as necro dirty garage as Aqua Nebula Oscillator's sound and it is not as clean as Agitation Free's either. The sound on She Said has a lot of garage feel though. It also has a lot of post rock feel too. This album is not a straight psychedelic space rock album either. It has taken some elements from indie and post rock too. Krautrock is the right label for this music.

The music is performed with tonnes of driving guitars who repeats and expands on the themes in the tracks. The drums and bass is also very much driving the tracks forward too. The instruments and the driving guitars gives this album a post rock sound. There are some vocals too on this album. But only sporadic. The vocals are good and adds added colours and textures to this album.

Most of the tracks are driven by driving, hard guitars. But some vocals and guitar harmonies, supported by keyboards, is really adding both more colours and quality to this album. Some of the guitar harmonies are stunning great. Wow...... is what they make me mutter under my breath.

This album is divided into some long suites. The title track is a nineteen minutes long suite (see Youtube) and shares Disc 1 with a small interlude and another long suite. Both of them are really great with a superb krautrock vibe. Disc 2 has some shorter songs and a couple of suites too. Disc 1 is by far the best disc on this album. The stunning at times pretty ambient title track is the best track on this album.

My only gripe with this album is the lack of a killer track or two. This album is a great album and I am almost ashamed of myself of not knowing about this band until three weeks ago. I need to move my antennas more in the direction of the underground kraut and psychedelic rock scene in the future. Do the same yourself and get this album. You will not regret it.