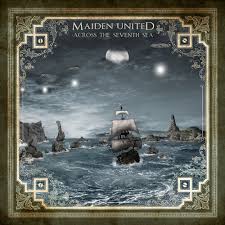 Maiden United has been praised for their untraditional approach to these excellent songs. Whether you praise or loathe their versions is a matter of taste. I find it strange, very strange to hear their piano based version of one of the most epic songs from Powerslave; the excellent Flash Of The Blade. Excellent on Powerslave, that is. I am too shocked to decide what I really think about Maiden United's version, though. This even after several listening sessions. The other Powerslave standard, 2 Minutes To Midnight, also gets a solid mauling. As you have sniffed out by now, Powerslave is my alltime favourite Iron Maiden album. My alltime favourite metal album, no less. Maiden United's version of the ballad Children Of The Damned is good, though. The same can be said about Infinite Dreams.

The reason I am perplexed and shocked is that Maiden United has stripped down these songs and built it up again in their own sound and personality. Gone is Iron Maiden's own personality and sound. Something I find very strange.

Maiden United is dead serious about what they are doing and they and their releases is getting rave reviews everywhere. There is no doubts their versions of Iron Maiden songs is a tribute and an acknowledgement of these great songs. As an unashamed Iron Maiden fan, I am not entirely sure how to react to this album. I love Maiden United for proving to us that Iron Maiden's songs are truly great. I am not a fan of their versions of these songs, though. I very much prefer Iron Maiden's versions, the original versions and the live versions.
Maiden United's versions falls a bit flat on their face. They are decent though. That is all I can say. If you are an Iron Maiden fan, this album is must-buy though. Make up your own mind.