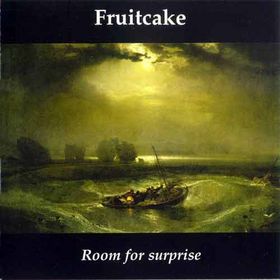 The third album from this Norwegian band. A band who inspired many musicians in Oslo to take up prog rock. The drummer Paal Soby was pretty central in the prog scene in Norway when I lived there. He also ran his own record label. This album though was released on Cyclops Records.

Fruitcake's music was pretty much middle of the road neo prog. Pendragon is a good reference. The music performed with synths, guitars, bass and drums. That and some less than satisfactory vocals. The vocals is the achilles heel of this album. Ditto for the sound which does feel too cold and not particular organic. I get a Depeche Mode feel throughout this album because of the sound. The music is in the Pendragon mode, though. In short; medium long songs in the symph prog mould.

The songs are pretty good. They are let down by the sound and the vocals. Fruitcake's music is pretty generic neo prog though and I don't feel they really added anything to the genre. Neither is this album. That is the problem with this album and that is reflected in my rating of it.