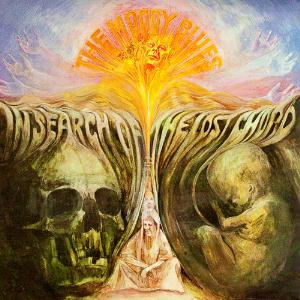 The Moody Blues is back to a more pop-rock themed landscape after exploring the symphonic orchestras on the previous year's Days Of Future Passed. It is obvious that they have moved away from the beat music on their 1966 album The Magnificent Moodies. They have become the famous band The Moody Blues.

In Search of the Lost Chord is heavy based on what The Beatles did. Even the sitar are included here. Justin Hayward's vocals is miles better than anything John and Paul did. The emphasis is still on orchestral arrangements. Clever orchestral arrangements with mellotron, keyboards and flutes. The Moody Blues was still sowing the seeds of progressive rock on this album as they started with on Days Of Future Passed.

The result is a very good flowery album which is very pleasing to the ears. The arrangements are excellent. The songs really not that great. The sound is very good too. Justin Hayward's vocals is brilliant. Ditto for the flutes. In Search of the Lost Chord is still a step backwards from Days Of Future Passed. But it is still a very good album from a band I am getting more and more into in my journey through their discography. A very pleasant journey and one I recommend.