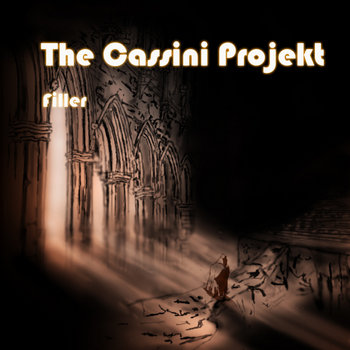 The second album from this Dublin, Ireland band.

I don't know anything about their 2008 album Blind Vision (but is downloading it now) so I am not able to report on their progression. Filler though is a quite raunchy heavy rock'n'metal with a lot of indie rock influences too. The music is not traditional hard rock and heavy metal by any means. The indie element is pretty big here. Ditto for some post rock elements too.

Most of all, this album reminds me about when Metallica got lost after their self titled black album. Load and Re-Load I believe was the name of those albums. The Cassini Projekt is in the same area. Just without the good tunes. Their music is very stressed out with very few pastoral melody lines. I think this is called modern rock. I am not so sure as this is not really my forte/knowledge base.

The music is being performed with guitars, bass and drums and some keyboards. All of them performed by one man, Alex Mc Donnell. He also does the pretty bad vocals. Vocals which falls short by miles on most places on this album.

The result is a pretty decent album which falls short everywhere. The songs are not particular good and the album title pretty much describes the songs here. This album is also without any direction, style wise. It jumps from one genre to another one without really making any hay in any of them. This is barely a decent album and nothing more. It is a free album so feel free to check out if I am right.