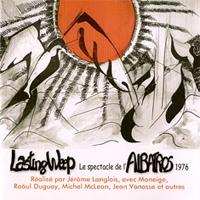 The first of two posthumous albums released by this Canadian band in 2007.

The band is the forerunner to Maneige and therefore a part of the Quebec scene. The roots of the mighty Maneige can be found on this and the other posthumous album.

This album was recorded live in Montreal between 28. February and 1. March 1976. Yes, that year also had a 29. February too as it was one of those years. So three nights it was. The result is over seventy minutes of music.

The music is performed with a wide variety of instruments. The flutes is pretty dominant in the picture and draws similarities with Maneige. No wonder, really. There is also a lot of woodwinds, guitars, keyboards, vocals, drums, percussions and bass here.

The recording is mainly concentrated around the tale of an albatross. Hence the title here. The music is epic throughout. Epic with the roots in both folk rock and jazz. The end result is a less refined version of Maneige where ideas is tried out in the public. Not all of the ideas is great here. Nevertheless; this is a good album and an essential album for those seriously into Maneige. Myself can be counted among those. Check it out.