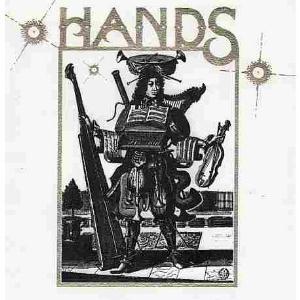 The debut album from this US band who is still alive and kicking. They have so far released four albums.

This album was actually released in 1996 on Shroom Productions, a small label who also has released some other obscure US symphonic prog albums. Hands was one of those bands who never reached the album stage due to lack of interest from the record labels. This album, which consists of several recordings from 1977, did not see the light before 1996.

We are deep into US symph prog land here. Take some early Kansas, Camel, Gentle Giant and Jethro Tull. Then you get something near this band. I would also add a bit Mahavishnu Orchestra to this mix.

The music is mostly instrumental and is created with flutes, keyboards, guitars, bass, drums and a lot of other instruments. The music is to say at least colourful, but still within the symph prog genre. Some of the melodies here are very good. Others again is only decent. The album is really suffering from the lack of a killer track or two. Seventy minutes with this album is well spent minutes though. I am dithering between good or very good here. But I land on a good rating. Check it out and judge for yourself.