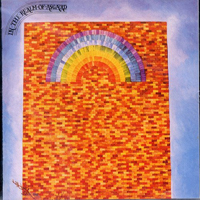 The only sign of life from this English band was this album.

Despite of the rather exotic name, Asgard was a pretty much in the mainstream English prog tradition with some rather catchy songs and a typical good old English symphonic prog sound. The Moody Blues and Barclay James Harvest springs to mind.

The sound is lush and flowery. It also has The Beatles and folk rock written all over it. The sound is actually very good. The music is performed with guitars, violins, bass, drums and a lot of vocal harmonies which sometimes reminds me about Crosby, Stills & Nash.

The songs are not particular long on this thirty-five minutes long album. But they really fills the songs with a lot of contents. There are even some great songs here. Mostly the title track which is infectious and a cracker. A bit of a bombastic chorus which is bordering to cheesy, but still pulls it off. A great, great song. The third track Town Crier is also a great song. The rest of the songs are very good too on an album without many weaknesses. What really makes this album such a great album is the vocal harmonies and the violins duels with the guitars.

This is a great album and one everyone into English symphonic prog must check out.