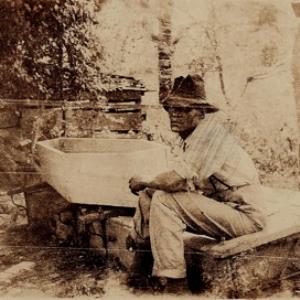 The third album from this US folk rock band.

Or maybe folk rock is not the right genre. Jack O'The Clock is a difficult band to pinpoint. Take some bluegrass, college rock, avant-garde prog, Americana and jazz. Then you get somewhere near this band and album.

This five piece band deliver their music with a wide variety of acoustic instruments + some loops. This album also got ten different guest musicians too. Despite of that, the music is pretty bare and not particular stuffy with many instruments. Some parts of this album got a the circus comes to town feeling. A bit vaudeville adds to the music too.

One thing I have discovered is that the album needs to be played a bit loud to be fully appreciated. It is most certainly not an album you can listen to while doing other things. It is a very demanding album. Despite of giving it my full attention during many listening sessions, I am not fully subscribing to the view that this album is a masterpiece, like other reviews will tell you it is. This is not really my kind of smorgasboard. The male and female vocals are really very good. The music itself not that good. It is lacking some really good songs and some instrumental bits who adds value and joy to the listening experience.

This is by all means a very decent album which would appeal to a lot others than me who likes more instrumental and soaring melodies than what is presented here. Sorry !