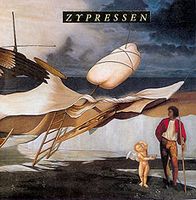 The one and only album from this Japanese band. A band who briefly appeared and then disappeared again.

I have to admit I am not so eager to review RIO/avant-garde albums. I got a lot of such albums under considerations though. It is not that I don't like the genre. But there is something within me who want to avoid this genre.

It is not denying that this album requires a lot from the listener. The music here is mostly chamber rock. That means numerous acoustic instruments. From bass, woodwinds, piano and percussions. Zypressen was also a five piece band who got help from three guest musicians to make this album.

There is a lot of very good ideas on this album. Ideas not entirely carried through on this album. A pretty messy album at times. A fifty minutes long album, no less.

The music is pretty dark. It is not as dark and wild as what I expected from a Japanese RIO/avant-garde album. The music here is pretty civilized, in fact.

This is a good album who could had been so much better. I still recommends this album to those into RIO/avant-garde music.