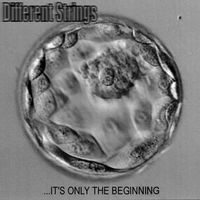 The debut album from this Malta based band.

I reviewed their second album The Sound Of Silence, Part 1 back in January 2012 just before I left ProgArchives and started this blog. I quite liked that album and was quite eager to explore the band some more. They have just released a new album and I purchased both that one and this album.

This, their debut album, was recorded by this duo. This duo consists of Chris Mallia on guitars, bass, drums and keyboards. He is helped out by Alan Mayo on vocals. And that is Different Strings. I guess the band/duo was named after one of my favourite Rush songs. I love that song.

There is not much Rush here. There is no Rush here to be precise. The duo comes across as a mix of Marillion and Eloy on this album. The sound is not that great and this fifty minutes long album sounds like a demo to me.

There is a lot of ideas here and most of them is still a bit sketchy and underdeveloped. I think the album title is an apology for the sketchy material. Apology accepted !

This is a decent album, nevertheless.