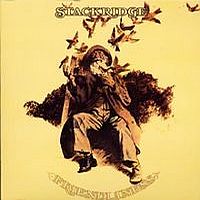 Although listed as a folk rock band in ProgArchives and other places, this band was once described as the west counties answer to The Beatles. The west counties means the seven (?) counties west of Bristol in England.

The same counties is also very much known for it's folk rock scene. To my knowledge, most English folk rock bands comes from these counties. The scene has off course been heavy influenced by the cider these counties are so known for. Cider is a sweet alcoholic drink made by apples.

And this album is also pretty sweet. Take a five piece with violins, guitars, cello, bass, drums, keyboards, flute and male vocals. Then you get this band and this album.

The music is indeed not dissimilar to The Beatles. Take a lot of folk music and add to the sound and music of The Beatles. Then you get this one hour long album. The Moody Blues and ELO also springs to mind.

The music is very poppy and based on short songs. Too short songs in my opinion. But the music is pretty enjoyable and very much in the 1960s vein. The end result is a good album with some very good songs and some not so good songs. I quite like this album.