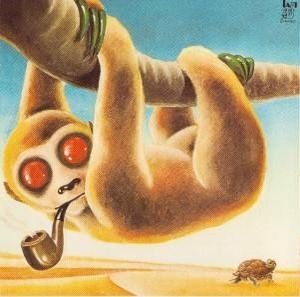 The debut album from this Japanese band who released five albums between 1974 and 1979.

This is accidentally the only album I got with this band. A band which I have been assured is a hidden gem in the prog rock world. Well, Isshoku Sokuhatsu is more a hard rocking psychedelic album than a straight prog rock album.

The vocals are in Japanese and they are male vocals. Their setup is the usual keyboards, guitars, bass and drums too. The music is at times very hard rocking. Other times, it goes into Moody Blues and Barclay James Harvest territory. The sound is a psychedelic one who also borders to krautrock too. To complicate matters further, there are also some Bad Company and Led Zeppelin influences here. Not to mention Le Orme and Area influences. Confused ?

To say that this album is a colorful sound collage is an understatement. Colorful and at times pretty entertaining. It also retains a great deal of Japanese identity and style. Which makes a pretty interesting album. Interesting and at times very good. That is what this album is. A very good album and I will try to get more albums from this band. Maybe they are gem after all. Check out this very good album if you can.