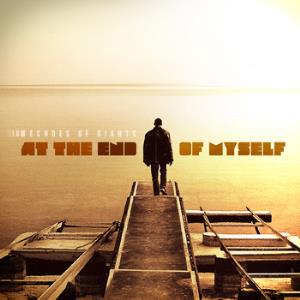 Another debut album from USA in the modern prog genre. Echoes Of Giants is a trio with a hired vocalist.

The music is performed with Joey Myers great vocals, programming, guitars, drums, keyboards, percussion and bass. The music is mellow and softly spoken throughout. There is a lot of shoegaze in this music and some post rock too.

This creates a very inward looking, soul-searching album where the lyrics and music is pretty powerful. It creates a good sound and a mellow mood. Not an uplifting mood, but rather a more reflecting, somber mood.

In other words; At The End Of Myself is a post-millenium album which fans of Yes, Genesis & the old prog may have problems getting their heads around. In my case; this is the case. According to other reviews, At The End Of Myself is a modern classic. They may be right. They may be wrong. I would still recommend this album to everyone as it is a very good album from a band I am sure we will hear a lot from in the future.