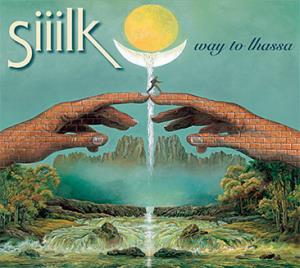 The debut album from this French band. A band consisting of members of the legendary prog combo Pulsar. In short; this band is veterans in the scene.

Siiilk (yes, three i's) has chosen to go down the Pink Floyd and ambient psychedelic indie rock. The music is very ambient at times. It is driven by acoustic guitars, some keyboards, bass, percussion and a lot of vocals. English vocals, that is. The music reminds me a lot about the modern indie scene too. The music is much more indie than progressive rock. And the music also has a lot of Asian mythical feel. A bit Indian - Tibetan feel. The album title alludes to that.

The end result is a good ambient album. My gripe is the lack of a great song, although the title track is very good. I have to admit I find this album too pedestrian for my tastes. It is still well worth checking out as it is now available through all Amazon shops or directly from their record label Musea.