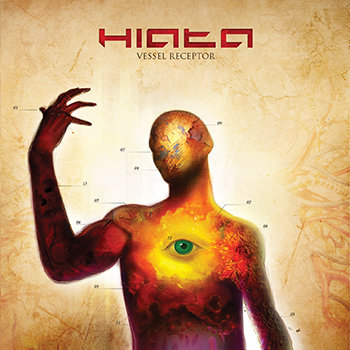 The debut album from this Portugal based band. A free download album from Bandcamp. Link below.

The band has tagged this album with everything from symphonic prog to fusion. None of those labels is anywhere near the music that comes out of my speakers. The music I hear is something between boyband pop, modern rock, nu-metal, djent, alternative rock, rap, electronica and indie. Linkin Park springs to mind much more than Yes and Return To Forever. This music is the exact opposite of what those two bands dedicated their careers to playing. The music on Vessel Receptor sounds very contemporary and calculated to reach the mainstream masses. If released on a mainstream label, this album would had been pretty massive advertised.

The problem with this album is that it feels a bit calculated. The vocals is a mix of tender whispering, rap and normal vocals. Linkin Park springs to mind again. The sound and music is very commercial. Then again, the album is bereft of any great songs and even good songs. The only thing I am left to do is to getting annoyed of how slick and calculated this album sounds. And yes, I am a middle aged man. I guess this music was not meant for me. I am too old. If in any doubts; check out the album from the link below.