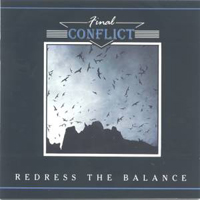 The latest Final Conflict made me interested in finding more album from this band and I went through my collection. I found a dusty copy of this album, their debut album.

Redress The Balance is an album from a band yet to find their style and their music. They dabble into folk rock, epic rock, rock, neo prog and hard rock on this album. Everything with the keyboards, guitars, bass, vocals and drums base line. The band tries their hardest and some of the songs sounds forced and laboured.

Redress The Balance also has this late 1980s sound. Not a good sound. The songs are not good at all. But the band still proves that they have a lot of talent and the end result is a decent album. Perhaps not an album worth checking out, but still a decent album.