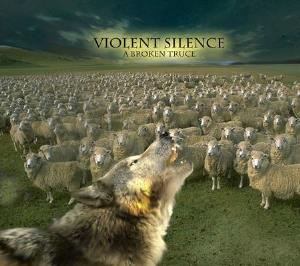 Four songs and the name of the band meant I expected a prog metal EP. Hence, I was not particular interested and put it aside for later, much later. Then the buzz around this album, for it is an album, reached me and I gave it some spins. I am glad I did !

Violent Silence's music is pure Swedish symphonic prog mixed up with some neo prog. Fifty percent of each, I would say. The average song length, make that epics, is around eleven minutes each. The album clocks in at forty-seven minutes. It goes without saying that this music is elaborate symphonic. The first song Prism Faith is a good example. Some very good vocals and some long and elaborate keyboards runs. Think Kaipa and think Anglagard. That is; without the moogs and melotrons. This band uses more neo prog like keyboards.

The music is great throughout and based on keyboards with some guitars too. The keyboards runs are excellent and gives me a lot of Genesis associations. The music is very melodic at the same time as it is also complex and requires some time to fully get. As a debut album, this is a brilliant album. A killer track would had been nice though. Except from that, this is an almost perfect album and one which surely will figure high on many people's list of best album of the year.