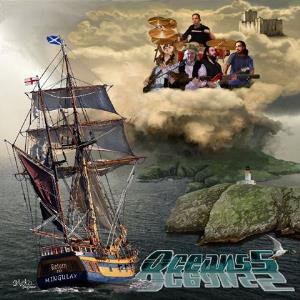 Oceans 5 is the Northern Irish (Ballymoney) folk singer Andy John Bradford and friends internet project and this is their first album. It is sad that Oceans 5 is not a real band as their music deserves a live audience. I think the music on Return to Mingulay is far better live than on an album.

But you don't know what I am talking about as I have yet to introduce and review this album.

Return to Mingulay is not purely a Nashville romp. There are a lot of folk rock here too. Parts of this album reminds me about Camel's Harbour Of Tears album and Wally's first two albums. And there are some prog elements here together with some southern rock elements. But Northern Ireland or not; the album is more US than UK folk rock. More Americana than Celtic. Ironic enough; the music reminds me somewhat about the band from one of Mingulay's neigbouring islands; The Vatersay Boys.

Labels or not and my dislike of country'n'western; the music on Return to Mingulay is good throughout. The best song is the very good (sea shanty) Mingulay Boatsong and that is also the promo single from this album. It is also pretty representative for this album. Andy John Bradford has a superb voice and I hope he takes the material from this album on the road with local musicians as the musicians on Oceans 5 is spread around the world.

Return to Mingulay is a warm album who appeals more to the hearts than to the brains. It is a good album. In their genre, I prefer the above mentioned Camel album and Wally's two albums though. I hope we hear far more from Andy John Bradford and Oceans 5 in the future. I have bookmarked both.