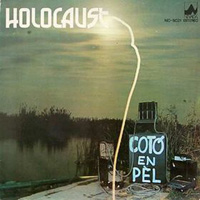 An obscure Spanish band with their one and only album. Nobody has heard anything from this band again.

Having managed to get past the far too long intro, the album really does not open up into a full flower. It feels convoluted and fragmented at the same time. The album consists of four ten minutes long pieces. None of them really leaves a good impression. The problem is simply that the music is not good enough.

This is a decent album from a band who at best is just a footnote in the history of Spanish prog rock, I am sorry to report.