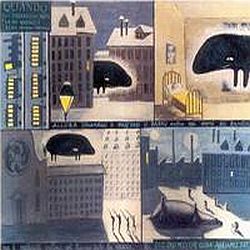 The debut album from this Italian band with the long and very forgetable band name. What is wrong with a band name consisting of one or two names ? The Beatles band name did not hurt their career.

The vocals on Dio Dio Mio, Che Cosa Abbiamo Fatto is male and pretty theatrical. Not as in operatic, but more like in a musical folk halls sense. The music is performed with a lot of acoustic instruments like acoustic guitars. The bass are also very dominant here. Most of all; the vocals drives the music.

The result is a good, pretty folk avant garde dominated album in the good old Area mould. An album it takes a lot of time to really get into. Hence, it is a grower. A couple of killer tracks would had elevated this album to being a great album. I do understand why this album is so highly rated though and I will check out their new, 2013 album La Maschera Della Morte Rossa.