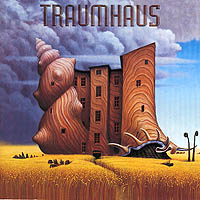 The debut album from this German band who so far has released three albums.

Germany is a vast country who has produced some bands with pretty much a local sound. It is not only that the vocals here are in German, but the band also has some other local trademarks up their sleeve.

That said, the core of this album and indeed this album's DNA profile is straight rock. Add a lot of prog metal and neo-prog too. All this with a lot of local colours and identity.

The album is around one hour long and we get treated to a lot of bombastic rock here with some rather clever details. Rather clever is the expression here. The songs itself is not particular long with the seventeen minutes long Ausgeliefert suite as the only break with the norm. The other songs are around six minutes long in average.

None of the songs enthuse me. The music is far too generic and wanders too easy into a prog metal territory. German prog metal, that is. The end result is a decent to good album which falls a bit short.