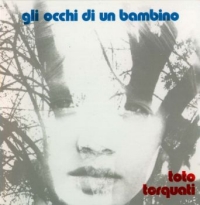 The first of two albums from this Italian musician and artist. The second album was released in 2009.

Toto Torquati was and still is mostly a studio musician, adding his keyboards and pianos on other artist's albums. That too is his instrument here. The other instruments here is guitars, Italian vocals, bass, flutes and drums. The typical Italian prog rock lineup.

And that is what we get on this album which is about the children's perspective of the world around us. The sound is very much a Rock Progressive Italiano (RPI) sound. The music is a mix if Italian rock, pop, folk rock and symphonic prog. Typical RPI in other words.

The music is not heavy and it is not complicated. It is much more in the Italian pop tradition. The vocals here are very good and ditto for the keyboards. I have my reservations against the children choirs here. But I guess they are a natural element of an album about children.

The end result is a good RPI album which will very much appeal to the RPI fanatics and be rated a lot higher than my rating. I like this album although it is not a great album.