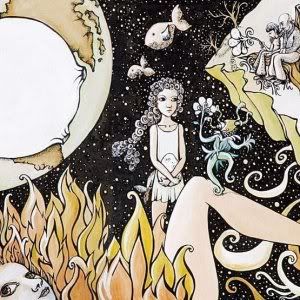 The second album from this Peruvian band. I got this band recommended by a friend of mine and purchased three albums by them just to get a feel for them.

Flor De Loto plays a form of heavy folk rock. Or folk prog if you want. Yes, the music is very proggy. The band use a lot of flutes in their music. Flutes is their main instrument. I suspect the flutes is pan-flutes. But I may be wrong here. The flutes has different voices and sounds. They are not the same flutes as Jethro Tull use. Anyway; the flutes sound is distinctive South-American. In addition to flutes; we also get guitars, bass and drums. This in addition to a couple of vocals tracks.

Most of the music here is instrumental and with a distinctive South-American sound. That said, this sound also sounds very Celtic folk rock too at times. The similarities are pretty obvious on this album. The music is also very heavy at times and there are strong folk metal influences here. The music is bordering to folk metal and this band would fit in well on one of the many folk metal festivals this summer if they played the music on this album. There are also a couple of more pastoral pieces here those are the ones I like best.

The end result is a good album which both sounds original and refreshing. There is no really great tracks here and I am not too impressed with the folk metal stuff. I genre I don't like. It is well worth checking out this band and I thank Sonia Mota for her tip off. I do agree with her.