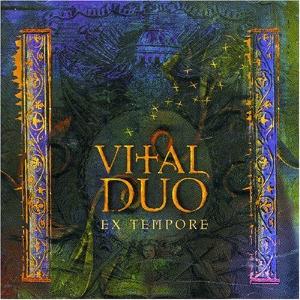 The side project from the Payssan twin brothers from the French eclectic prog band Minimum Vital and their only album so far.

The idea of Vital Duo was to make a medieval classic music inspired symph prog album. Hence Ex Tempore. The twin brothers plays all instruments themselves. That means tonnes of keyboards, guitars, percussion, mandolins and bass. The sound of church organs is prominent here. Which gives this instrumental music a medieval classic music and folk rock feel. This is also a path later explored by Blackmore's Night, Advent and in particular Three Monks.

The album starts with the great seven minutes track La Tour Haute and I am getting the feeling that all the hype around this album in ProgArchives may be right. Four less interesting songs follows before the album is getting a lot better on the final tracks. This is an uneven one hour long album.

It is though a very good album and one well worth checking out. I will keep listening to this album.