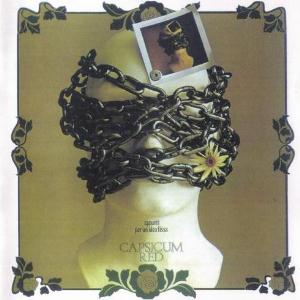 Another one shot Italian band who released one album and a couple of '7 singles before disappearing again. This band included a member of I Pooh, a very successful band who released a new album some months ago. I reviewed it for this blog.

Capsicum Red was a much more classical music and ELP orientated band than I Pooh. The music on this album is also mostly instrumental and takes us through the cathedrals in Italy and down to the rocky coastline where we enjoy some dry Cinzano bianco on ice and with some apricots slices. That is the essence of this album.

The music is made by keyboards, guitars, bass and drums. That and some sound samples. The sound is not the best where the guitars tends to get lost in the mix. The vocals too is a bit muddy. But we get the music and the music is good. Music in the good old symphonic Italian prog tradition.

This album is not highly rated and it is obscure to say at least. It is still a good album well worth checking out.