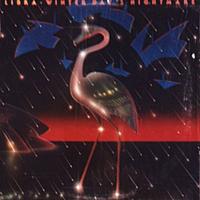 Well, I did not expect this one.

Libra was an Italian band who released three albums in the 1970s. Winter Day's Nightmare was their second album. I also got their third and final album too which is scheduled for a review in March.

The reason why I did not expect this music is the band's classification as an RPI band in ProgArchives. RPI is exactly what we don't get here. The album starts with some Yes rip-off riffs and then goes over to rip-off The Rolling Stones on a regular basis on this album. Most of all; the album is a funky run through of the pre-disco pop and funk scene in the 1970s.

The English vocals is very funky and ditto for the music. That goes for the guitars, keyboards, bass and drums too. Strangely enough, this 1976 album does not feel out of time in 2014 either. It almost feels like a Jamiroquai album. The vocals is very much in the Jay Kay vein.

I am by no means a fan of this music. This album is a good album though despite of being a bit alien to me. The album has rhythm and tonnes of joy. It also got a lot of style too. It is in a perverse sense a funny and a good album. Check it out.