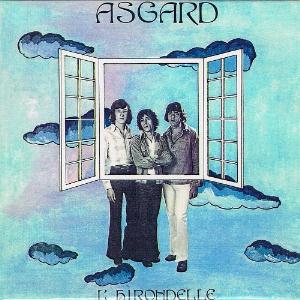 The debut album from this French band whose second album is a great album. I reviewed it in January this year.

L'Hirondelle is a folk rock album as Asgard started out as a folk rock band. That means plenty of flutes, violins, acoustic guitars, bass, drums and French vocals. Style wise, they can be compared to the English band Magna Carta. The music is pedestrian and filled with male vocal harmonies.

The band was as trio back then and that shows. Their brand of folk rock is pretty basic with a few exceptions. These exceptions is the occasional foray into a more eclectic music. The guitars are good here though and the band sometimes let rip on some more instrumental, jazz inspired melody lines.

That aside, there are also some not so decent stuff here which equally annoys and bores me. The end result is a decent album which is no match for their second album. Get that one and ignore this one.