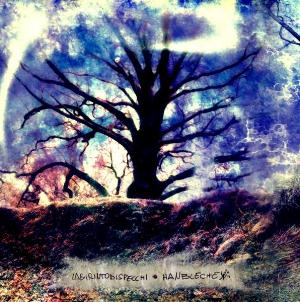 The debut album from this Italian band. The band was formed by the former frontman of the rather obscure band Pholas Dactylus who released an album in 1973. I am not sure if I have got it and/or if I have reviewed it. That band was rumored to be something special, an oddity in the scene.

I think that also goes for Labirinto Di Specchi. The seventy minutes long Hanblecheya is indeed an oddity. The music is indeed eclectic too with a lot of King Crimson elements and jazz elements. But most of all; the sound and music is a mix of post rock and Italian prog rock with classical music thrown into the mix too. The music is instrumental throughout.

The music is performed with spoken Italian words, post rock like guitars, bass, drums, keyboards and cello. The music is very dynamics and follows the ebb and flow pattern with full aural assaults from the band combined with a more pastoral parts. Some of the music is also very much post metal too.

The end result is a pretty unique Italian band with a very good album. This is a very dynamic album with a lot of very interesting details and guitar harmonies. Seventy minutes with this music is a bit of a mouthful. But this album still comes across as one well worth spending time on. I recommend it.