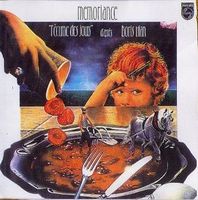 Their first album Et Apres from 1976 was a very fine symph prog album in the best French tradition. That album also included strong influences from Steve Hackett and Pink Floyd. That set Et Apres a bit apart from other French symph prog albums from that time.

3 years later, most of the Steve Hackett and Pink Floyd influences has been put in the background and the more French theatrical symph prog tradition has come to the forefront. That means Mona Lisa and Ange.
The music is still very melodic and symphonic. Very much so. The French vocals is now more spoken and narrative than just vocals. There is plenty of clean harmonic vocals here too, but not as much as before. The Jacques Brel tradition is also more present here with a lot of folk influences too. But the music is still very symphonic and lush. The church organs here is great.

The end result is a thirty-eight minutes long album with no particular great songs, but still with some very good songs who underlines this band's credentials. Those into symph prog should check this one out.