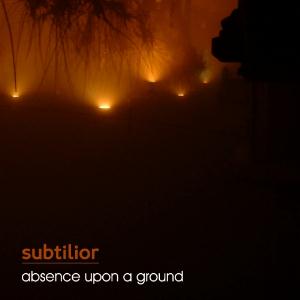 The debut album from this Areknames side project.

We are talking RIO here in the vein of Aranis. A clean break with Areknames, in other words. All instruments are acoustic as in a chamber orchestra and the music is instrumental throughout.

The music is neither light or dark. The music is somewhat lacking in nerve and cohesion. It is somewhate pedestrian too and does not really break into a coherent unit. The masters of this genre, Aranis & Co, has mastered the art of making beautiful/disturbing pieces of music within the chamber orchestra genre. The same genre as Subtilior has broken into. It seems like Subtilior has not really grasped the nerve and the concept which makes Rio and avant-garde great when it is done by the masters in the genre. Absence Upon A Ground is just aimless meandering away. The result is a pretty poor album which is barely saved from they turkey farm by a couple of decent tracks.

This is by no means a good debut album and I would suggest try harder next time. Or rather; concentrate on Areknames full time.