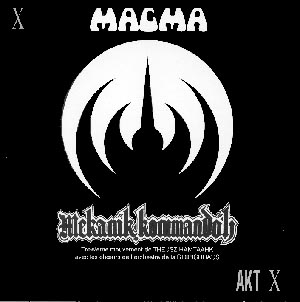 The ninth studio album from these French zeuhl masters/inventors.

Mëkanïk Kömmandöh is the follow up to the pretty dreadful Merci album which took Magma out of zeuhl and into jazz and disco. Mëkanïk Kömmandöh is thankfully a return to zeuhl. It also feels like a rehash of old ideas from their 1973 album Mëkanïk Dëstruktïẁ Kömmandöh. Which indeed it is. It is the band going back to redo this album again. No wonder I felt I had heard it all before.

I very much like Mëkanïk Dëstruktïẁ Kömmandöh and see not much point in the 1989. It feels like the band is on it't last legs. Which indeed it was too for a long while. It took them fifteen years to release another album.

Mëkanïk Kömmandöh is a good album in it's own right. But it is not as good as Mëkanïk Dëstruktïẁ Kömmandöh by any means.