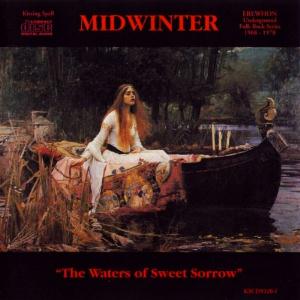 The one and only album from this English folk trio who later, minus the vocalist, became the much more well known Stone Angel.

This album was released in 1993. But it had been recorded in the 1970s and the tapes put in a storage. This is not unusual in today's scene. Another Midwinter album is still in cold storage, I have been told. It is not likely this album will be released though.

The music on The Waters of Sweet Sorrow is angelic vocals lead folk music backed by violin, guitars, harp, banjo and mandolin. It is as primitive as folk music can get. Their version of Scarborough Fair is stripped down and made into a middle aged sound. The rest of the album too follows that tradition.

The songs are pretty good throughout. Jill Child's vocals is excellent and her withdrawal is a loss to the music scene. The not so good songs material is outweighed by her vocals and makes this a good album. For those who seeks more than good vocals; bypass this album. For the rest of you; check it out.