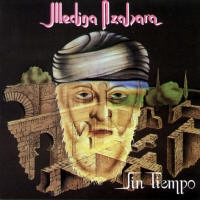 For some reasons I don't really understand, I bought a lot of their albums last year. Not one of my most inspired decissions, it has to be said.

Sin Tiempo is their sixth album. After some rather promising art rock albums, the band is back doing what gave them a legend status in their homeland Spain: Passionate rock. That is hard edged rock with a lot of passion, hair, balls and guts. Some hard guitar runs is intertwined with some passionate ballads. All of it in Spanish. This album and their music has a lot of local flavour. It is not bad too. Neither is it good either. The songs are not particular good and the band is somewhat lost in a sea of mediocrity. In short, avoid this album unless Spanish hard rock is your thing.