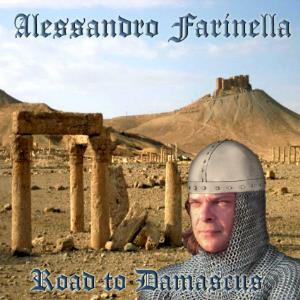 The second album from this Italian keyboardist. His first album (2008) was named Momo and that is all I know about this album. That and that this album has been released by Musea and it is about those pesky crusades. Something that cover art work also more than alludes to.

Road To Damascus is a concept album and probably a rock opera too. It sounds like it. A lot of rock operas has been released lately. But maybe this is not a rock opera after all. I don't know.

The music is symphonic neo-prog with a lot of musical references to the likes of Anthony Phillips. But I get a lot more early Magellan references from this album. Both the vocals and most of the music. Mr Farinella's music is not as hard as Magellan was, though.

The music has a lot of keyboards (surprise !) and guitars too. The vocals are pretty good, although a bit heavy accented. The music follows the concept album formula in a quite rigid manner and the listener is not getting any surprises along the way to....... well.... Damascus. Or rather, the end of the album after forty-six minutes. Most of the music also has a pretty clinical neo-prog sound which not everyone will appreciate. It sometimes breaks out into some interesting melody lines.

This is a very good album which does not really rise above that level. I have been listening to this album on a regular basis for over a week and cannot really say this is a grower either.

This is a very good album though and well worth purchasing if symphonic neo prog is your cup of tea.