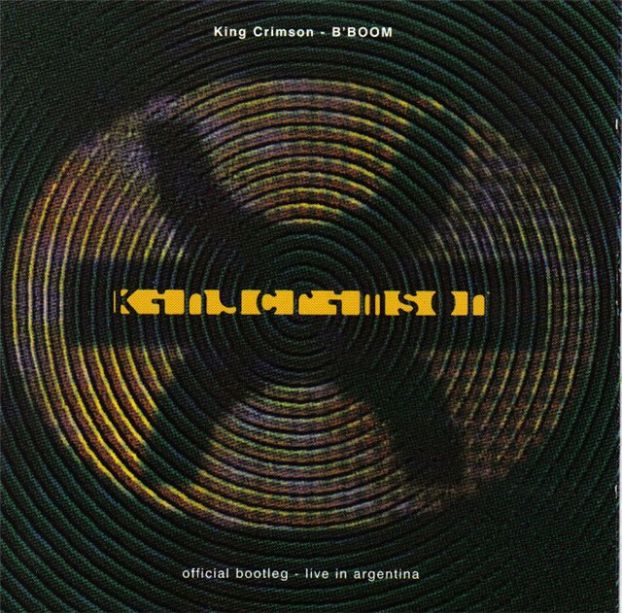 Please note that this album was first released in 1995 under the B'Boom Official bootleg Live In Argentina title and re-released as Live In Argentina earlier this year (2012) with two bonus tracks. It is essentially the same album though. I am reviewing the 1995 album.

This is one of many KC live albums now as they/their record label/Robert Fripp have unleashed an avalanche of live recordings on CD. Twenty or so, to be precise. In the case of KC, that is great as this band went through numerous phases and setups. This band is also among the handful of most important bands ever to grace this planet.

B'Boom Official bootleg Live in Argentina has a proper great sound and by no means bootleg sound. Don't be scared about the "bootleg" tag as this double CD is the real deal. It was recorded in Argentina back in 1994 and includes an eclectic mix of their material. It is by no means their greatest hits or even close to feature their best material. Whatever is their best material.

The version of Red is excellent and a straight version of this great song. The rest of the album is a mix of improvisations and their more eclectic material from the 1980s. There is not much from the 1970s here. Robert Fripp and King Crimson is very eccentric and that shows on this album. Very eccentric. If you want a song based live album; forget this album. If you want KC at their most eccentric, this is your album. If you love their 1980s material, get this album. I am inbetween and really like this album. Is it a great live album ? No. But I think it is a very good live album from a band who never stopped being eccentric and unpredictable. I rate KC as one of the best bands to have ever graced this planet though.