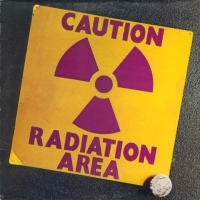 The second album from this avant-garde Italian prog/jazz band. A highly influential band.

Where their debut album Arbeit Macht Frei had a lot of Soft Machine and sane moments, the band has gone all out for the lunatic asylum on this album. The album title does not lie. This album comes with a warning. A justified warning.

The music is scattergun avant-garde jazz with a lot of melodies. Scattergun because the melodies and ideas is scattered around this album as if distributed by a scattergun. There is method in this madness though. It takes the listener some patience and some listenings to get the concept. A concept delivered by hammond organs, woodwinds, guitars, bass, drums and Demetrio Stratos madman vocals. Or voice, as his vocals is just voices added on the top of the other instruments.

The result is a bewildering, but still a good album. It is also a good funny listen too. Most of the ideas and melody lines are good to great. Others again are pretty poor. Hence my good rating. This album never becomes boring though and it is worth checking out for all those of you with a robust mental health.