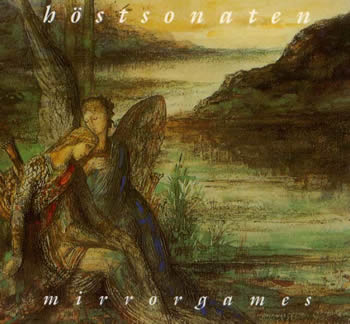 The second album & the follow up to the excellent self titled debut album.

Plenty of moog and mellotron heralds a symphonic prog album. Well, sort off... A mix of neo and symphonic prog to be more precise. The songs are very long and the album is built up as a concept symph prog album. The music is more in the neo prog vein, though.

The great things here are long instrumental, mainly moog and melotron lead passages. The not so great thing about this album is the very weak vocals and the feeling of having heard most of the stuff before. Even the celtic flutes stuff. Mirrorgames is a very safe product where no chances has been taken and no decent vocalist put in the front of the microphone (sorry, Fabio).

This is though a good album and I like most of it. The instalment of The Rime of the Ancient Mariner is good too. This album is a big let down though compared to the debut album. I hope this is a blip and nothing more.