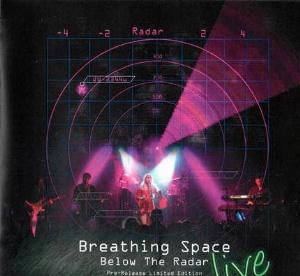 Breathing Space was Ian Jennings band after he broke out of Mostly Autumn. Breathing Space was disbanded after three studio albums and this live album. They have now reformed again under the Stolen Earth monic and released their debut album A Far Cry From Home earlier this year. I gave their album a good rating in August this year.

Breathing Space was a pretty decent female fronted band in the indie/prog rock vein. Mostly Autumn is a good reference. Breathing Space was one of many bands in that scene and did not really have any success. During their Below The Radar tour or gigs, someone taped one of their gigs. The sound quality was dubious, but they still released it as a live CD and DVD. The bad sound quality really hides their music. The music is rather good though. But the value for money is rather poor. Avoid this live album and go for one of the three studio albums if this band interests you.