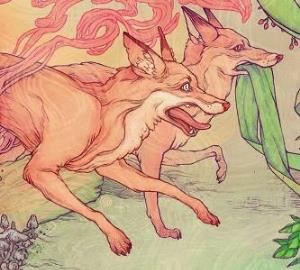 The fourth album from this Spanish band.

The band is now a quartet with one bassist, one drummer and two guitarists.

Toundra is a band in the experimental metal genre in ProgArchives. I would also label them as a post rock band. But I have no problems with what ProgArchives has labeled them as. A great job from the ultimate and best prog rock website on the net.

The band has shown some interesting developments on their previous three albums (I, II, III). They have gone from a bit barren landscape to a much more flowery landscape. Their III album was a good one.

The band still produce a lot of barren post rock landscapes on this album too. They have added a great deal of avant-garde to their music too. So much that they are, very fast, approaching the avant-garde territory.

It can be said that Toundra has always been an avant-garde band. I would fully understand that sentiment. They have gone an extra mile on this album towards that territory.

A couple of the tracks almost have a The Beatles anno Revolver feel about them. Toundra must have had a look at that album, me believe.

There is a lot of colours on this album. A lot of interesting pieces and structures. Toundra has not managed to put those into a coherent and great enough album. But there is enough good stuff here to make this an interesting & good album. I like this album although I am no fan of this genre. Check out this album and this band.