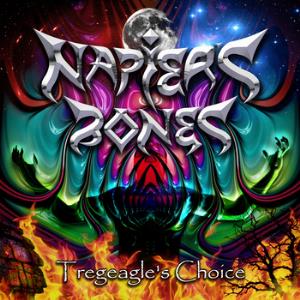 The band is a duo with Nathan Tillet on vocals and Gordon Midgley on all instruments. Together, they create a lot of noise.

Meaningful noises, that is. There is a lot of Mellotron, flutes, guitars, bass, drums and vocals here. Enough to make the casual listener panic and move away.

I very much liked their debut album too and the review is here. I have taken some xtra time with Tregeagle's Choice though as it is a very complex album.

I believe this is some sort of a concept album as it has all the trademarks of a concept album. The word "Tregeagle" is being branded around the whole album and that is not a common English word. It is in fact not a word. It is the name of a district in Cornwall, a particular unpleasant magistrate called Jan Tregeagle and a demon/ghost of the same name.

The ghost and demon theme really resonates with the music on this almost one hour long album. A very dark album at times. A dark concept album somewhere between eclectic prog, neo-prog and symphonic prog. Add some folk rock too and you get this album.

A killer or a great track would had been something of a blessing here. But there are none. Nevertheless, this album drags in the listener and does not really let it go. There are also a few pieces of great music here at the same time as there are no weakness on this album.