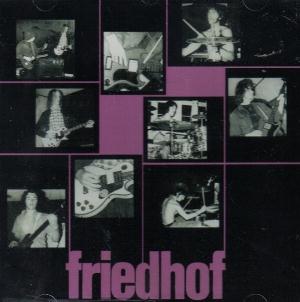 Friedhof was a trio with a lineup of guitars, percussions, bass and drums. No vocals in other words.

This is one of many bands who came, released an LP and then disappeared again..... only to show up on Youtube 40 years later. Hence, I am very happy about Youtube and the MP3 converters which makes it possible to review albums like this without an LP player and a second mortgage to pay for this extreme rare LP.

I think there is a CD version of this album too out somewhere. Bootleg or not.

This album is listed as a krautrock album in ProgArchives and the CD is listed as a psych prog album on Amazon. Both listings are to a certain degree right.

What we get here is forty-three minutes of hard blues. There are no vocals and most of the music here sounds like a jam. Hence the krautrock and psych prog references. There are also a long drum solo here which does not sound that interesting.

There are more than one references to Black Sabbath. The guitar solos comes thick and fast. Most of the stuff is guitar solos here. If you want guitar solos, this is your album.

The sound is not that good and the melodies is left wanting. This is still pretty much a charming album as I like my guitar solos. But not all the time. Not forty minutes with guitar solos. Hence my rating.