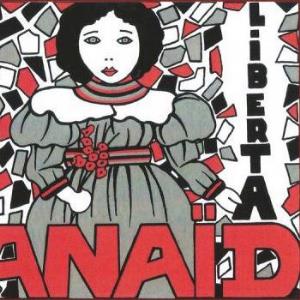 Wow !! I did not expect the return of this band after the sad passing of Hugh Hopper, the bassist and one of the founding members of this band. Yes, this legende also did zeuhl in his time. The previous two Anaid albums proves that. I have reviewed their second album, the 1989's Belladonna album here. And that was the last time I thought about this band.

But Anaid has returned with a new lineup, 27 years later. Emmanuelle Lionet is still the vocalist here. She has got help from three other musicians who provide vibraphone, drums, percussions, keyboards, piano and bass.

We get over forty minutes of music here, including a tribute to Hugh Hopper at the end of this album. A moving tribute.

The rest of the music reminds me a bit about both Zao and Cos. Also a bit about Gong again.

Emmanuelle Lionet's vocals and her use of it reminds me a lot about Kari Rueslaatten from The Third And The Mortal album back in 1994. A bit over the top throughout this album.

The vibraphone is really good and there are a lot of good guitars here. The second song La Louve is very operatic and dark. Very zeuhl. And that is what this album is. A dark zeuhl album. An album with a lot of influences from opera music.

This album is good throughout. There is no great tracks here. But Anaid is more than welcome back again and I hope we will hear a lot more from them in the future.