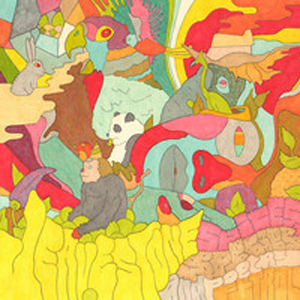 Jeavestone is a five piece band on this album. Their lineup is flutes, keyboards, guitars, bass, drums, percussions, melodica and English vocals.

I quite liked their 2005 debut album Mind The Soup. Good eclectic prog. So I gave them another chance.

The term "playful" very much applies to this album. This album is like a playful, slightly demented cat. Make that; quite a demented cat. But still a friendly cat who just want to cuddle and be your friend.

The basis here is pretty much funky rock. Add some jazz, folk rock and a lot of eclectic prog in the Gentle Giant mould. Beardfish is also an excellent comparison.

The music is very much in the Nordic vein with a lot of influences from Sweden. Even from the likes of The Flower Kings, although these influences are quite subtle. But it is obvious that this is a band from the Nordic countries and Scandinavia.

There are even a half-amusing parody on US promotional advert for the ankles wonderstuff Swankle. It was fun for the first two times. Then I am skipping that one.

The rest of the album is forty minutes of playful eclectic prog with good melodies throughout. This band is very much a good addition to the European prog rock scene and this album should be checked out.