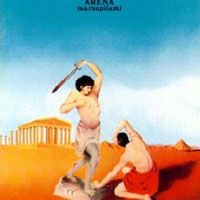 The band was a six piece band on this album with a lineup of guitars, bass, drums, keyboards, mellotron, tubular bells, woodwinds, flutes and vocals.

Peter Bardens from Camel produced and played percussion on this album. An oddity worthy a note.

Their 1970 self-titled debut album was a complex, ecletic album which I liked. So I wondered if the band was going to go soft and more commercial on the follow up album, this album.

The band did the opposite. This album is a kind of a concept album about the Romans and the Roman Empire. And the album is far, very far from being commercial.

The music here is very eclectic and very complex. So complex that it is difficult to keep track of what is going on. The themes and melodies are rapidly changing on this forty-five minutes long album. An albums divided into five songs. The longest song, the title track, is clocking in at thirteen minutes.

Eclectic and complex....... but not particular good. There is only sporadic goodies here. The album is suffering from being a tad too complex. A tad too clever. A tad too eclectic.

The good themes and the good song writing handicraft from the debut album is missing. But I still have to give this band a lot of credit for their bravery and balls. There is also some good stuff here and I like their sound a lot. But I am not surprised that the band was not invited back to release their third album. This album must have been a bridge too far for even the audiences in the 1970s.

This is a decent to good album. It is also a challenge to anyone who likes eclectic prog. Check out this album.