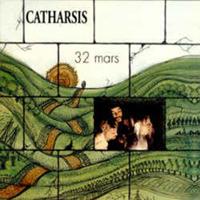 Catharsis was a quartet on this album. Their lineup was farfisa organ, drums, percussion, guitars, bass and some vocals.

Catharsis was also a band with their own identity and sound. Their own genre, in fact.

Take space rock, add some krautrock, avant-garde rock and some French symphonic prog. Roland Bocquet's farfisa organ is very much in the centre of their music. That gives this band their own sound. Add a lot of the French humour and eccentric nature too and you get this.

The opening track, the title track is a straight edge space rock workout, the Catharsis way. Which means tonnes of farfisa organs. It is a long track too, clocking in at over eleven minutes.

The second track Masq is something entirely different again. It is a circus track which you will find played in a the circus when the artists is doing their bits.

The other two tracks is a bit on the symphonic prog side, not too far away from what Focus did on their best.

The album is far too short. Then again, you can just put it on the repeat button and play it over and over again. Something this album is worth.

My only gripe is the lack of a truly great track. But this is still a good album and well worth checking out.